A portion of the He-Leo Two Rivers Preserve was the first land donated to the Byron Forest Preserve District in 1982. The preserve is named in honor of Helen and Leo Piper who once owned the land. The preserve, which lies at the confluence of the Rock River and Leaf River, was expanded to 48 acres in 2013 and can be accessed by either vehicle or water. The site features a floating boat dock, kayak launch, picnic shelter, oak woodlands, prairies and wetlands along the Rock River floodplain. It is a haven for migrating waterfowl and other aquatic wildlife. Leashed dogs are allowed on the site.

The District’s Restoration Department has done woodland restoration with the removal of invasive species and thinning of opportunistic trees in the oak woods at this preserve. The goal of this type of management is to return these woods to a similar structure to how they appeared when settlers moved into these areas in the 1800s. At that time, fire frequently covered the landscape. These fires benefited native oaks and hickories and kept the woodlands in a very open state that allowed for a diverse ground layer of flowering plants. Fire is also critical in helping young oaks and hickories to establish. Without fire, other species move in and shade out the ground layer and stop the regeneration of oak species. Most of our oak woodlands have very few to zero young oak trees in them due to the lack of fire in the last 100 years. We remove brush and thin the other tree species to bring light back in and mimic the openness of the former oak woods, we then use prescribed fire to control invasives and other brush, and these fires help reestablish young oaks to eventually become the next generation of canopy trees.

The Restoration Department also planted a diverse prairie seed mix into the four-acre roadside field at the preserve in 2014. This prairie planting is doing very well and has a diverse mix of prairie grasses and wildflowers to enjoy all summer. Every acre of prairie is also critical in providing additional habitat to bees, butterflies, grassland bird species, and many other animals and insects.

The preserve is open to the public daily from dawn to dusk (weather permitting). This preserve is accessible by vehicle from Route 2, about 3 miles south of Byron, and by boat on the Rock River across from Rockvale. There is no motorized boat launch; the docks are open to daytime use by boaters on the river only (in season). Canoe and kayak users may launch at the preserve. Leashed dogs are allowed in the park area but please no pets in the shelter. 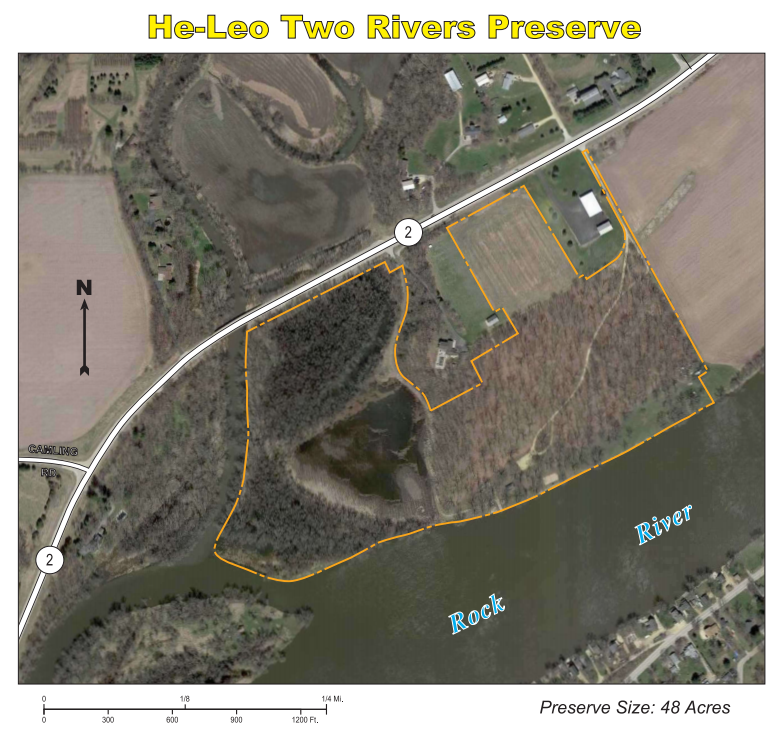