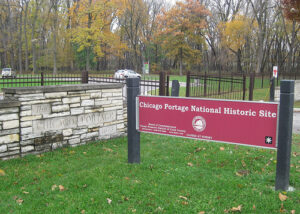 Join staff archaeologist Paula Bryant of the Illinois State Archaeological Survey to learn about the Chicago Portage, a low and short divide between the Great Lakes and the Mississippi River systems, has been described as one of the “keys to the continent.” Following the lead of generations of Native Americans, explorers Marquette and Joliet first crossed the Chicago Portage in 1673. One of the most important travel routes of the mid-continent, the portage was a significant factor in the development of the United States interior. During early European exploration, natural waterways were often the easiest route across the North American landscape and places where canoes and trade goods could easily be carried around barriers or across multiple rivers were critically important. Along with the opening of the Illinois and Michigan Canal in 1848, the portage became the transportation link that spurred the growth of the City of Chicago.