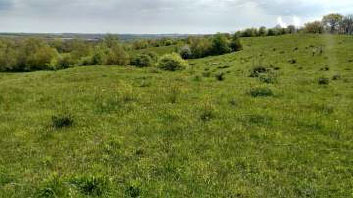 In the fall of 2017, the Byron Forest Preserve district (BFPD) officially acquired and protected a 160 acre natural area southwest of Byron. This new natural area has been named “Bald Hill Prairie Preserve”. The name Bald Hill has been the name of this area for at least 125 years, farmers and residents in the area still know the site by that name, and an 1874 Ogle County plat map even labels the top of the site as Bald Hill. The word ‘bald’ was used historically to describe a treeless area, which means this preserve was mostly open prairie at the time of European settlement. Some of that original prairie, with several rare prairie plants, still survives on the site and was a major factor in working to protect the preserve. More than 99.97% of original prairie in the state has been lost and saving and managing these last remaining original prairies is a major goal of all conservation groups to protect the rare plants and animals that call these sites home. 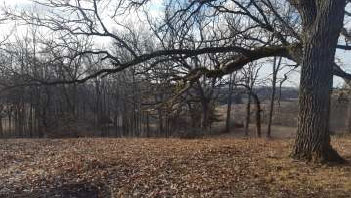 The new preserve contains primarily open habitat consisting of original prairie and pasture grasses. A portion of the large south hill has an oak savanna with beautiful large bur oaks. This savanna has closed in over time with other woody species so the District’s restoration staff will be restoring this area to its savanna character. Several of the steeper hills that support the best native prairie on site also have brush on them; the removal of this invasive brush is the first goal of our restoration staff this winter. The terrain is rolling to say the least, it is difficult to find a level area anywhere on the 160 acres. We have estimated 180 feet of elevation difference between the top of Bald Hill and the bottom of the lowest draw. In addition to the native prairie grasses and wildflowers on site and the large Bur Oaks, we have also discovered some very large Eastern Cottonwood trees in the bottom areas. In fact one  of these Cottonwoods seemed to be so large we thought it could be among the largest trees in the state. After taking some measurements and sending off a nomination form to the Illinois Big Tree Register through the University of Illinois Extension, we have confirmed this site has the State Champion Eastern Cottonwood and is among the  largest trees in the entire state. We will have signage and a trail leading visitors to see this enormous tree this spring.

The Illinois Clean Energy Community Foundation (ICECF) and the Natural Land Institute (NLI) were both instrumental in helping the District protect this preserve. NLI is a not-for-profit land trust based out of Rockford (www.naturalland.org). NLI acquired the property in holding for the District following the sale of the property at auction in the summer of 2017. District staff then applied for a grant through the ICECF to assist with the purchase of the site. We were awarded a grant for $434,000 from the ICECF in November which paid for 66% of the purchase. We were also awarded an additional $10,000 to go towards initial restoration efforts of the preserve in 2018. In the end, the District acquired this preserve for just over $1,350 per acre. Visit www.illinoiscleanenergy.org to learn more about this Foundation and their amazing accomplishments to help protect natural areas across Illinois.

In the spring or early summer of 2018, District staff will build a parking lot and trail access at this property. Cattle are still on this site through the winter as part of the former farm lease agreement so public access is restricted until the spring. Restoration staff will also be conducting the first prescribed burn at this site in the early spring. Prescribed fire will really benefit the native plants on site and help
restoration staff begin to control exotic invasive plants like multiflora rose and bush honeysuckle. 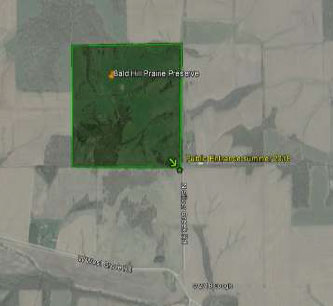 Bald Hill Prairie Preserve is a wonderful addition to the public natural areas cared for by the Byron Forest Preserve District. The site will be open for passive recreation to all people beginning this spring. Activities allowed will include hiking, running, bird watching, picnicking, snow shoeing, and cross country skiing. No motorized vehicles or bicycles allowed at this time. Bald Hill is located at the north end of Silver Creek Rd to the north of West Grove Rd. For more information about this new natural area for wildlife to call home and for the public to enjoy, please email at Russell@byronforestpreseve.com or call 815.234.8535 ext 219.